Find us on Team App

At the end of 1972 Ron Hill and Tom Dyke, through advertising in the “Southern Times”,  were able to generate interest in the local community for the creation of a Table Tennis competition during the 1973 Winter Season.  (See attached letter 2/2/73).

On the 1st of March 1973 a meeting was held of interested persons (see attached Outline of Minutes of that meeting).  This was followed by another letter(4/3/73) to “Southern Times” reporting on progress and advising the date of the first Annual General Meeting which was held on the 5th April 1973.  (See attached Minutes).

Thus, thanks to this group of enthusiastic tennis players (who were looking for another ball sport to play during the winter period), the Southern Table Tennis Association was formed .

The first night of competition was May 3rd 1973.

Further information on that first year:

Percentages from the 16 most successful men and women from that first season.  (Check out some of the names – they are still playing today).

The winter competition for the next 13 years was run on a home-and-away basis, utilizing local halls and schools as match night and practice venues.  There were many stories and characters to come out of that period and Geoff Goss has written an article about one of those characters.

Ingrid Flower and Helen Berry share some of their memories of times before the Centre was built and their feelings today.  Thank you Ingrid and Helen.

With participation numbers growing year by year, and with there now being 6 grades, there was a need for a purpose built venue to be constructed. We were extremely lucky to then have as a player Ian Morris, who was also a Noarlunga Council employee. With his guidance and a lot of hard work by a small group of enthusiasts we were able to obtain sufficient funding for us to realize our dream and thus, on the 30th of January 1987 the first cut for our own eleven table stadium at Wilfred Taylor reserve, States Road, Morphett Vale was made.

The driver of the tractor is none other than Geoff Goss!

Most will not realize that other than the main outer structure, a majority of the work within the building was done by this same small group of enthusiasts.

Many hours were then spent there, after a full working day, putting up the lightning and the wall cladding

Even building the canteen from the groud up 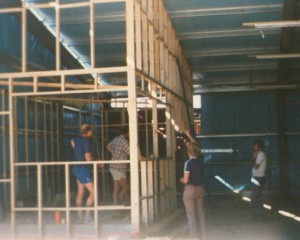 A lot of the time the work was being done by car lights with sausage sizzles being the main feed for the day. 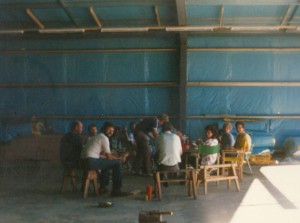 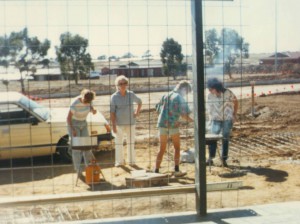 years ago, on the 6th of May 1987, the first matches were played at the Southern Table Tennis Centre. 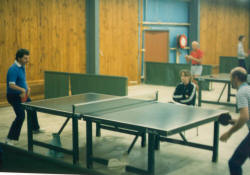 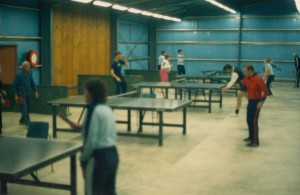 As you can see from the above pictures, on that first night we played on a cement floor, the wall cladding was not finished, we did not have all the barriers and it pored with rain, but who cared, we were just so proud to be starting the season in our own building.  (The current wood flooring was not put in until the end of that first Winter season.)

One player who started competition in the year the Centre was opened was Matthew Lambert.

He shares his memories of the Centre 20 years ago:-

“I started playing Table Tennis 2 years before the Centre opened through my local primary school “Flaxmill Primary” at the wonderful age of 8. I remember the first time I entered the new Centre and was awestruck at the size and atmosphere as compared to playing in local school activity rooms barely big enough for 4 or 5 tables.

The first Winter season at the new Centre was also my first year of competition and of course I played the bottom grade, what was then F Grade. I also clearly remember walking up to collect a trophy at the year end presentation for winning the First Year Player award and how nervous and shy I was. It’s a little sad to realise that I am the only junior from that time still playing at the centre but am proud to say I have played every season for the past 20 years.

Here’s to another 20 years, at which time I will be able to play as a veteran. ” 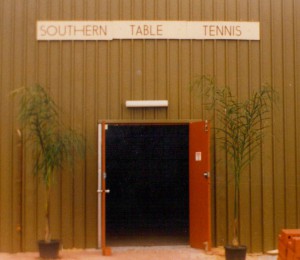 The front door as it was at the Official Opening 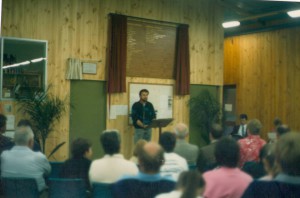 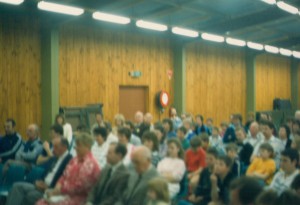 Many of the people involved in the building of the Centre are still involved with the Association in some way or another.  If you look at the “Executive Honour Roll” on the corridor wall you will see some familiar names going back to 1975.  Congratulations on their past and ongoing dedication to our Association.

The Centre was expanded in 1998 to include the office, meeting room, additional storage and our own toilet and shower facilities.

Back to the top